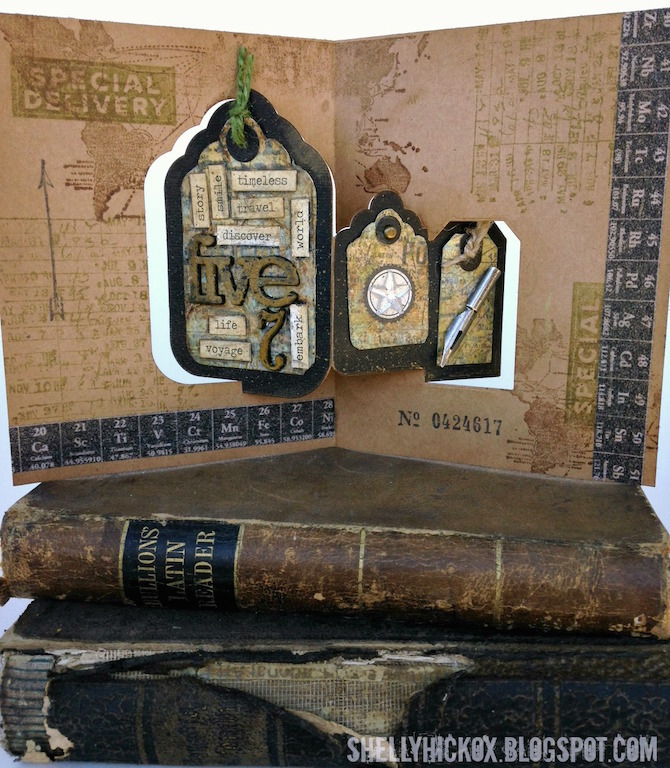 When I first saw Tim Holtz's tag for January, I knew it would be perfect as a birthday card for my husband. His birthday is on the 30th and, since we're heading out on a road trip tomorrow, I hurried up and got it done today.

Karen Burniston's Tag Pivot die set was released at CHA and it is SO cool! I jumped at the chance to use it for this card. I followed Tim's directions pretty closely, focusing most of the technique on the first tag. To make the tags stand out more, I cut the tag portion of the card die out of black Kraft Core'dinations and added it over the top of the base card. I used Tim's new Correspondence and Documented stamp sets to create my background. These won't be out until next month, but you can preorder them at Simon Say Stamp right now! 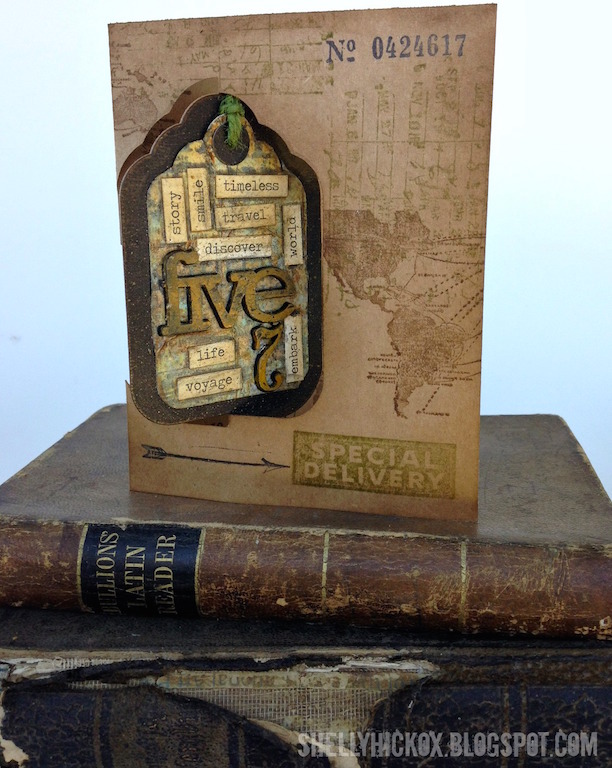 As I started choosing stamps and words, I noticed that a travel theme emerged. I think that's perfect for a masculine birthday.

My video is a little washed out, but you can see the way the pivot works, which is so awesome. I am going to wear this die out, I'm sure!

Everything I used can be found at Elizabeth Craft Designs and Simon Says Stamp via the links below.

I hope you're having a great week. I'm taking a few days off but I have a couple fun projects that I can't wait to share with you very soon!
Posted by Shelly Hickox at 5:20 PM 11 comments: 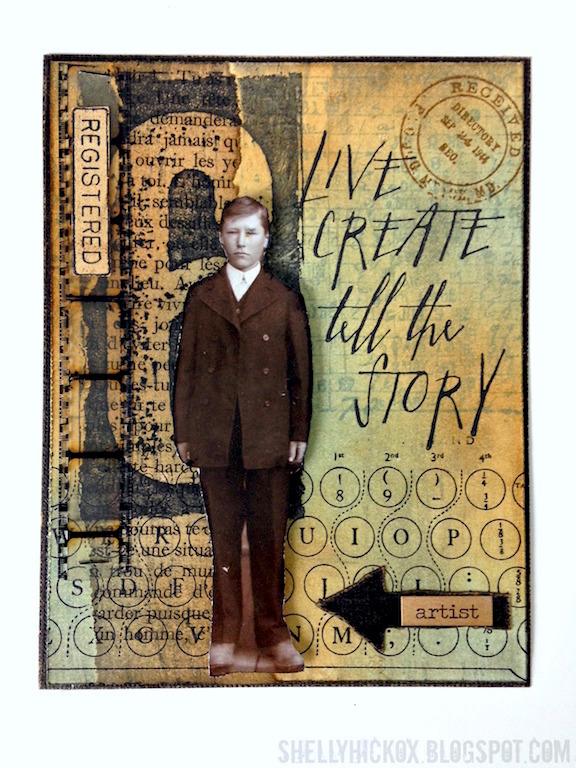 Hi all! Today I'm sharing a card I made for CHA using Tim Holtz's new rubber stamps from Stampers Anonymous. This release was such a fun and eclectic mix and I had a blast creating with them.

To create this card, I started by sponging Weathered Wood and Brushed Corduroy onto a piece of manila cardstock. I used stamps from Tim's new Correspondence, Documented, and Big Number Blocks, along with a piece of torn French text to create the background.

Next, I added a boy cut from a Found Relatives card, mounted on foam dots, and a piece of Film Strip Ribbon attached with the Tiny Attacher. On the right side I stamped one of my favorite quote stamps using Jet Black Archival ink. I cut an arrow from black Kraft Core, added a chitchat sticker, and attached it to the bottom. Finally, I adhered the piece to a black Kraft Core card.

The supplies I used can be found at Simon Says Stamp and Inspiration Emporium via the links below. Remember to use my coupon code - stamptramp - at IE to save 10% on your order!


I hope you enjoyed today's card. Stay tuned - I have lots more to share! Have a great weekend. :)
Posted by Shelly Hickox at 10:23 AM 12 comments: 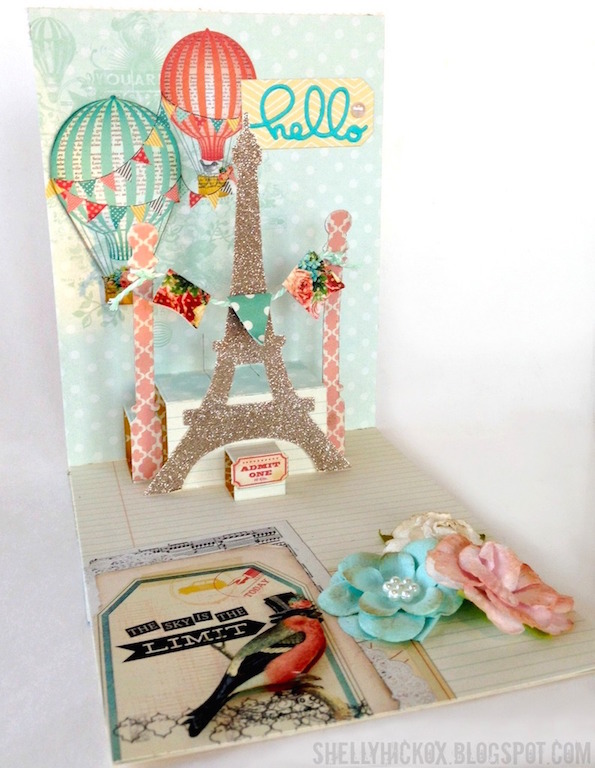 Hi all! Today I'm sharing another card I created for CHA using Karen Burniton's new Pop it Ups dies release. You may have seen the card I shared last week where I used the new Eiffel Tower Pop Stand die and made a gatefold card with the Eiffel Tower standing up. The great thing about this die set is that the Eiffel Tower can be used apart from the Pop Stand! For this card I decided to combine it with Karen's Lots of Pops die set to make this glittery, spring-y, pastel card.

To glitter the Eiffel Tower, I first applied an Elizabeth Craft Designs adhesive sheet to a piece of kraft cardstock. I diecut the paper, peeled of the release paper and then applied my glitter. It's amazing how easy and tidy it is to apply glitter this way! The little bunting was made with the banner and pole dies that are included in the Lots of Pops set. The small tag is from Karen's Tag Pivot Card set (wait 'til you see the card I made with that one!) and the hello is from the Accordion Rectangle Card set. 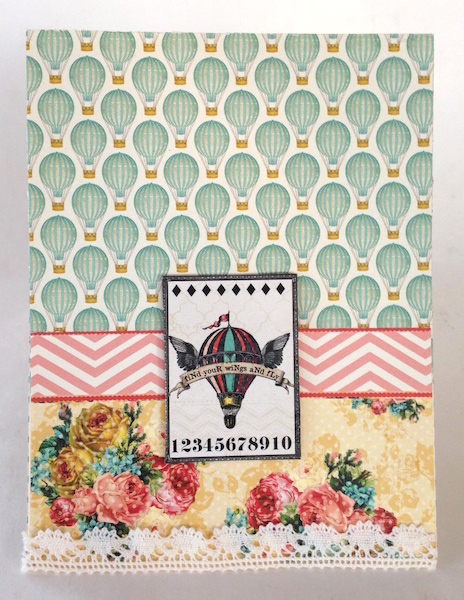 Since the main action is on the inside of this card, I kept the outside simple. The paper I used is all from My Mind's Eye Up and Away collection, which apparently has been discontinued. :( I found a 6x6 pad at Michaels so you may still be able to find it there. I might have to stock up - I love this paper!

The video shows how sparkly the ECD Microfine glitter it. Just gorgeous! I think this would make a perfect birthday, thank you,  or Mother's Day card.

The products I used can be found at Elizabeth Craft Designs and Simon Says Stamp via the links below.

Thanks so much for stopping by today! I hope you enjoyed this pretty Parisian card. I have so many ideas for this die set - I can't wait to share them with you!
Posted by Shelly Hickox at 11:23 AM 3 comments: 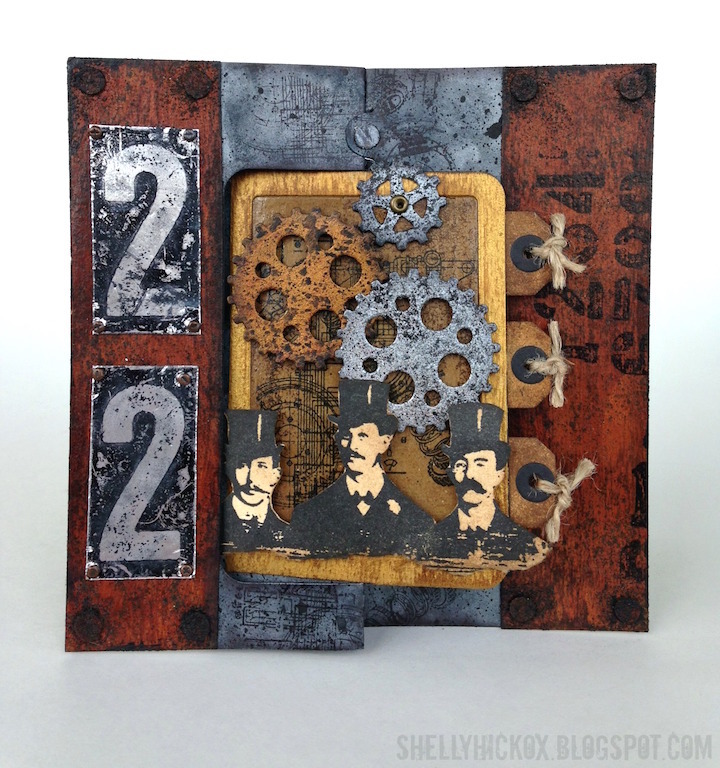 Hi all! Today I"m sharing the card I made for this month's Designer Challenge from Karen Burniston. For January's challenge, Karen asked the team to use dies from at least three different categories. I hadn't had a chance to use her new Rectangle Pull card so that was my first choice for the card base. After that, the hardest part was choosing which other two dies to use! 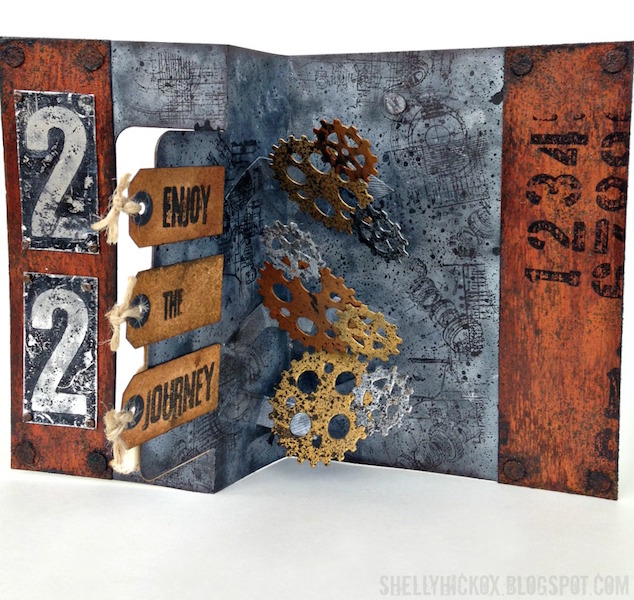 I thought the Rectange Pull card would look great done up in a Steampunk style, so I grabbed the gears from the Clock and Gears set and went to work painting them with DecoArt metallic paints. On the edges I added chipboard panels that I painted to look like rust using Andy Skinner's technique. For my third die, I used one of that tag dies from Karen's new Tag Pivot card set to add a sentiment. The metal numbers were made with Tim Holtz's new Number Blocks stamps. I used StazOn ink and stamped onto foil-covered cardstock then trimmed and adhered to the card. Love that stamp set! 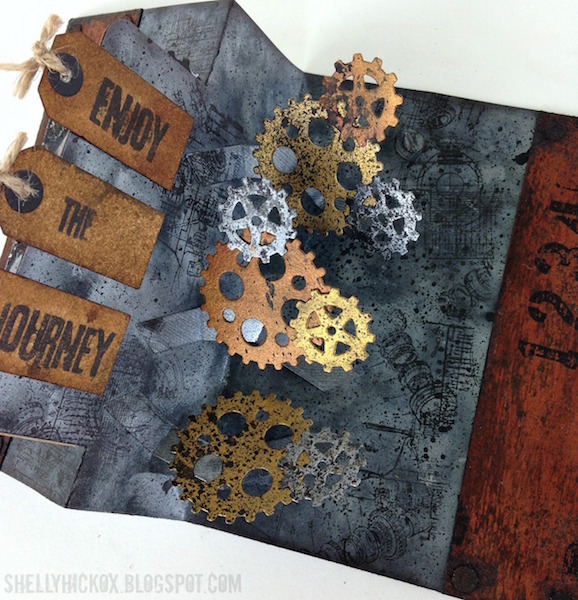 This shot shows the gears much better - and how cool is that new spinner? It's included in the Rectangle Pull set and can be used anywhere along the fold that you want it. I decided that a flurry of gears would be perfect for my steampunk card, so I added three. Two are turned up, and the bottom one is turned down. Love the effect! You just need to be careful about your gear placement so the card will close easily. 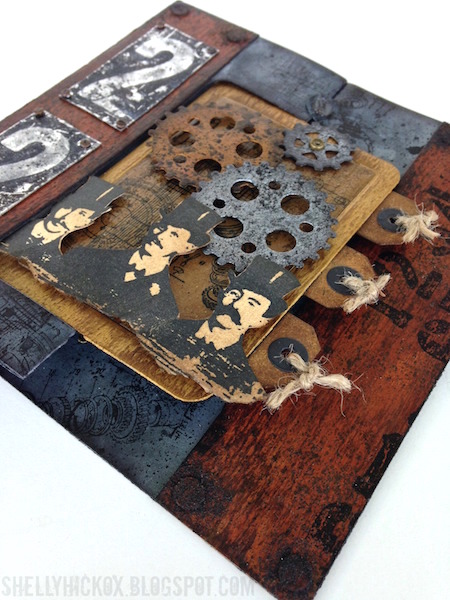 The front of the card ended up being the hardest part for some reason. I finally decided on cutting a frame using the card die combined with the included frame. I painted it gold, stamped the inner panel, then reinserted it into the opening. A few more gears plus Tim Holtz's steampunk gents and the front was done!


When I first thought of tripling the spinner mechanism, I wasn't sure it would work. Take a look at the video and see what you think. I love the effect! It makes me think of all the other cool ways this idea could be used.

All the supplies I used to create my card can be found at Elizabeth Craft Designs, Inspiration Emporium, and Amazon via the links below. All the paint I used is from DecoArt's Media paint line.

I hope you enjoyed my steampunk-y Pop it Ups card. For loads of inspiration plus another fantastic tutorial from Karen Burnsiton, make sure you check out the Elizabeth Craft Designs blog on Wednesday!
Posted by Shelly Hickox at 3:22 PM 16 comments: