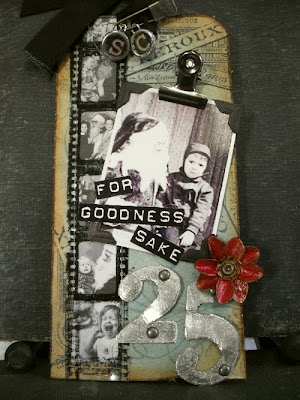 Such a fun tag today, but so many things I didn't have! I think that's what made it fun for me. Here is what I didn't have, and what I did to make it work:

Film Strip Ribbon - To make my own film strip, I stamped Tim's film stamp repeatedly on acetate using black Stazon ink. I trimmed it and put the pictures behind it as shown on Tim's blog. 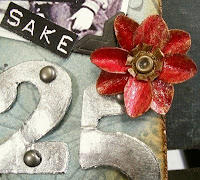 Metal Flower - I used my Martha Stewart hydrangea punch (love this punch!) and punched two flowers out of red cardstock. I brushed them with copper paint and then with walnut Distress ink. I bent the petals and coated them with a light layer of Diamond Glaze. For the center I punched out a flower (daisy punch) and then trimmed off the petals. I painted that gold and brushed it with walnut ink. Assembled using a brad. Isn't that faux eyelet tech cool??

Metal Numbers - I used my Slice to cut the numbers from cardstock. Then I covered them with aluminum tape from RockCandy Studios and sanded them to make them dull. I sponged with a little black Stazon to give them an aged look.

Typewriter Keys - I punched the letters from a sheet of scrapbook paper and then glued them to little wood disks. I used the bent part of a paper clip for the jump ring. When it was dry I 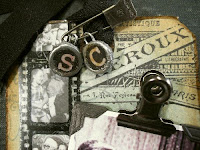 covered the edges with silver embossing powder and embossed. Then I added clear ep over the top. Should have done that in the reverse! Next time....

Dymo Tape - I am out of black tape, so I tried black cardstock. I didn't like the look so I used this font and printed it on photo paper.

The background stamp I used is from Oxford Impressions' Paris Poste collection.

Whew! That was a lot of improvising, but I feel like I learned so much, which is why I LOVE these tags!
Posted by Shelly Hickox at 3:13 PM