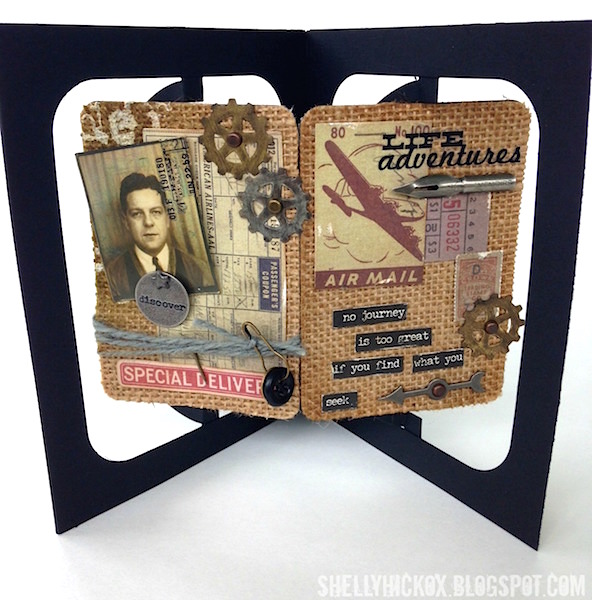 Hi all! It's been awhile since I played along with Tim Holtz's 12 Tags and I had a spare afternoon yesterday so I decided to whip up a quick card. One thing that I love about this challenge is that Tim has done all the work, so all I had to do was pick out my embellishments! I decided to make mine masculine so that I could use it for a Father's Day card or masculine birthday card.

I basically followed Tim's tag layout, but used Karen Burniston's Rectangle Accordion Card die for the base. I cut two panels out of black cardstock, then cut two more from burlap paper. After I snipped the center burlap pieces free, I went to town decorating them.

Since the panels are a bit shorter than a tag, I split the tag layout between them. I replaced the ribbon with Tim's Jute String, and used Karen's Gear die to cut gears from metallic Shimmer Sheetz so that I had a die cut element to replace the flowers that Tim used. I love the look of the Shimmer Sheetz! To give them a vintage look, I sanded them lightly and then swiped a bit of black paint over them and wiped it off. I don't have the new tokens he used, so I just flipped over a Holiday Token and added a rub on. It's a great way to get double duty from holiday-themed embellishments if you have extra.

Once the burlap pieces were decorated, I adhered them to the center of the card and then attached the panels to each other to create the accordion. I love this style of card - so fun for the recipient to display!

All of the supplies I used can be found at Elizabeth Craft Designs and Simon Says Stamp via the links below.

Thanks so much for stopping by today!
Posted by Shelly Hickox at 7:36 AM