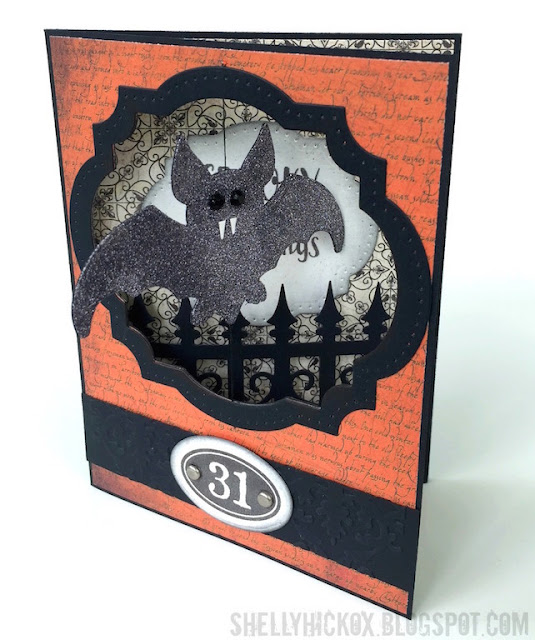 Hi all! Today I'm sharing a spooky interactive Halloween card using dies from Karen Burniston’s newest release. Halloween is one of my favorite holidays (obvs) and I couldn’t wait to combine the dies from this fantastic new collection into a fun card that features lots of motion. 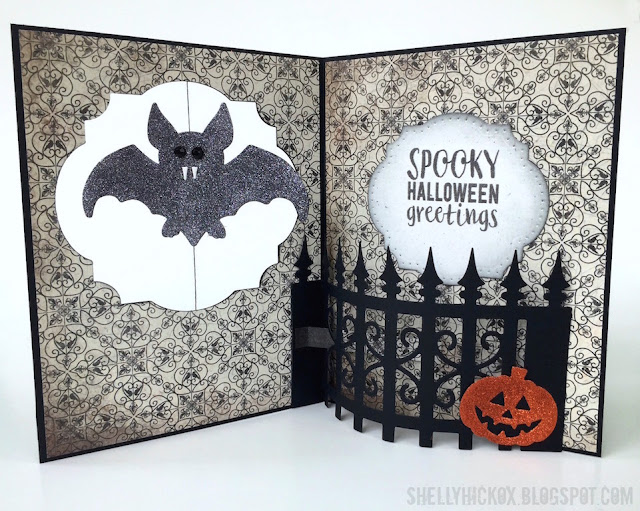 I’d seen a kinetic bat card on Pinterest and thought it would be fun to try this technique using Karen’s new Midnight the Bat character die, along with her new Labels & Circles frame set. You wind it up when the card is open, then carefully close it. When the recipient opens the card, it will start spinning. Fun!! Of course, I had to add even more Pop it Ups goodness, so I used the new Iron Fence Pop Up on the inside. This card is a spinning, popping wonder that will delight any recipient, young or old. Here’s how to make one yourself: 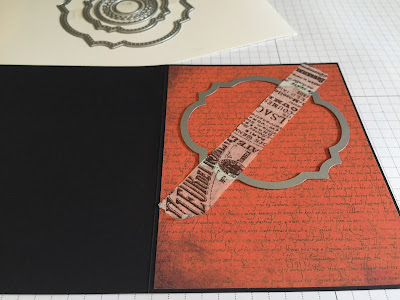 Cut a piece of black cardstock measuring 8.5″ x 5.5″ and score in the center, creating an A2 sized card. Add decorative paper panels to the front and inside. Use the second smallest frame die to cut an opening. Since you’re cutting through three layers, you might have to run it through your machine a couple of times. 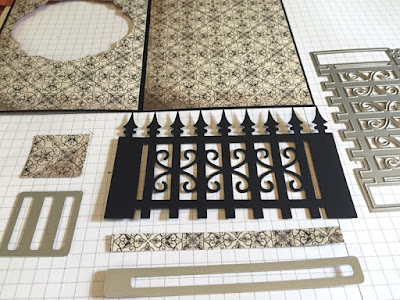 Next, die cut the the pieces as shown above, using the Iron Fence Pop Up die. 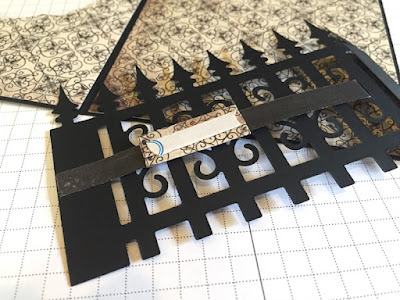 Assemble the slider mechanism and adhere to the back of the fence as shown above. There is a full video tutorial from Karen HERE. 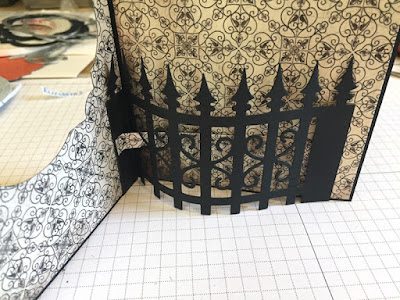 After you attach the fence to your card, it should look like this when open. So cool, right?! Note: I used a black marker to color the end of the tab so it blended in with the fence. You can see the tab in the above photo, but in the finished card it’s nearly invisible. 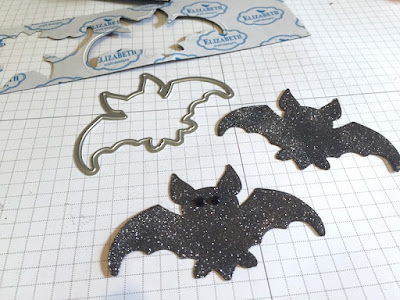 Now it’s time to make our spinning bat! Apply Elizabeth Craft Designs Clear Double-Sided Adhesive to a piece of black cardstock. Cut two bats using the shadow layer of Midnight the Bat. Remove the backing and adhere two black gems for eyes on one bat piece. Cover both with Elizabeth Craft Designs Pewter Silk Microfine Glitter, polishing with a fingertip to bring out the sparkle. 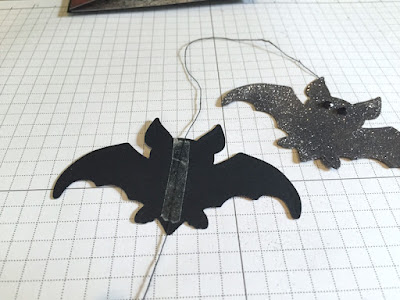 Flip one bat over and apply a length of Elizabeth Craft Designs Tape as shown. Cut a length of black thread and adhere to tape. Use adhesive (I prefer wet for this step) to adhere bats back to back, sandwiching the thread in between. 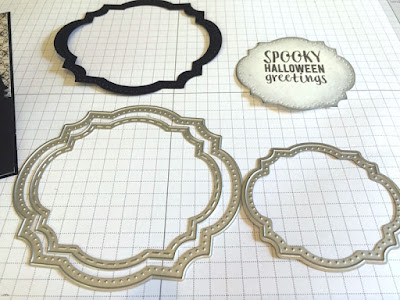 Create a frame from black cardstock by nesting the largest and second largest dies together. Stamp greeting using one of the dies from Karen’s new Halloween Clear Stamp set and die cut with the third largest frame. Ink edges with black ink. Adhere greeting to inside of card, behind the fence. 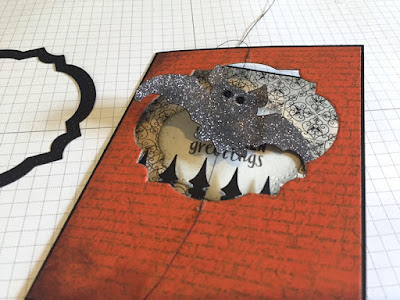 Use a tiny bit of tape to hold Midnight in place, with his eyes facing the front of the card. Apply glue to the frame and adhere to card front. I also added a number plaque that was stamped using one of the new stamps from the Halloween set (shown in the first photo at the top of the post). I decorated the fence on the inside with a glittery jack-o-lantern that was cut using the charm from Karen’s new Halloween Charms set and glittered in the same manner as the bat (shown below). 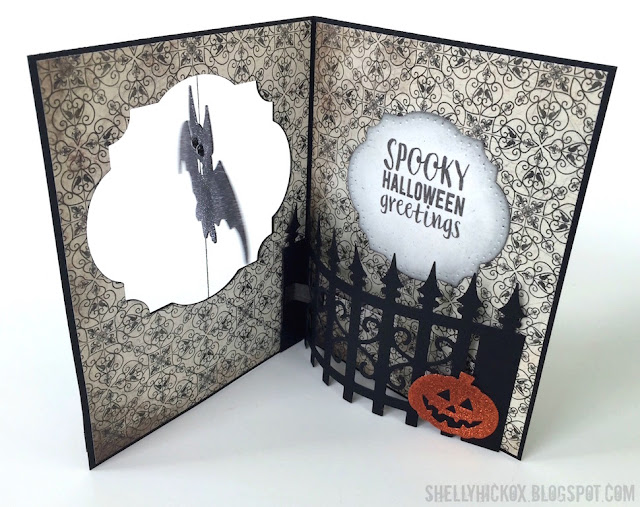 I tried to get a photo of the bat in motion – it’s hard! But it is so fun to watch it spin when the card is opened. And the fence…how cool is that?! When you open the card, the tab on the left actually pulls the other end of the fence, causing it to flex and bend out from the card. Seriously, is Karen a genius or what?! I can’t wait to experiment even more with this fence. And it’s not just for Halloween! You could use it in so many different ways.

Here's a quick little video to show how the bat spins when the card is opened. It also shows how incredibly sparkly the ECD glitter is - love it! Note: I did notice that my thread - very cheap from Walmart - started to unravel a bit after a few windings and spinnings. I'm sure it would have been less of an issue if I'd used more expensive, sturdy thread, so keep that in mind when you're making one. Also be sure that you don't overwind the spinner. The tension will pull the thread away from the frame and make the mechanism sag.

The supplies I used can be found at Elizabeth Craft Designs and Simon Says Stamp via the links below. The Halloween dies and stamps should be available in the next week or two, so make sure you check back! I'll be sure and update this post when they are ready to order.


Thanks so much for stopping by today!
Posted by Shelly Hickox at 10:10 AM