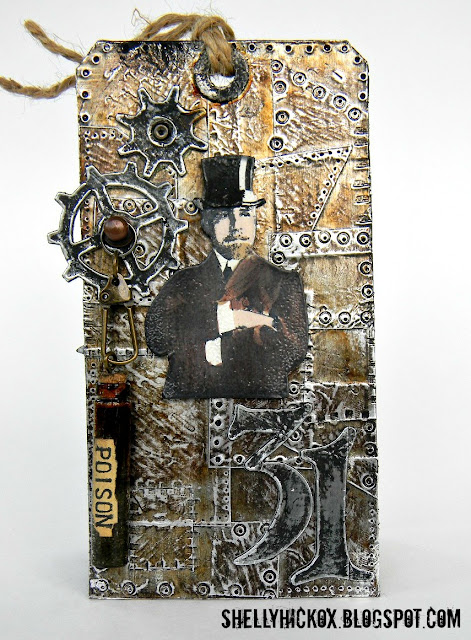 I love when the first of the month rolls around and it's time for a new tag from Tim Holtz. He never fails to inspire, and this month is no different! Sometime this week I got the idea to use Karen Burniston's Pop 'n Cuts die to create a pop-up tag. While I was running it by her, Karen supplied the brilliant idea of making an 'Instadeath' type change from the front to the inside. Since I am all about Halloween right now, I had to figure out how I could translate all this Steampunkish metal into something spooky! 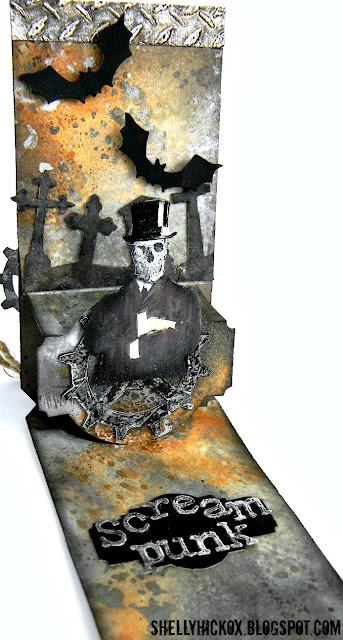 Oh no! I guess he drank that poison. Instant Screampunk! My little skully man was inspired by Sandra (Made by Sannie) who had the awesome idea of replacing the heads of Tim's Steampunk guys with skulls. I thought just maybe, if I stamped Tim's skull from the new Halloween 3 set onto gessoed Shrink Plastic (thanks, Linda!) and shrunk it, it would fit the nice man from Artistic Outpost's Loverly London set. Well...as you can see, it worked perfectly! I can't even tell you how excited I was by that. :)

To create the pop-up, I cut cardstock using the Sizzix Pop 'n Cuts Circle Die with the PNC base die. To fit it into the narrower space of a tag, you need to trim it down and you'll lose the two side supports. It will still work just fine, though. You should be able to do this with many of the other PNC inserts too! For a tutorial on how to create a similar pop-up tag, you can check out an older post of mine on the Sizzix blog. 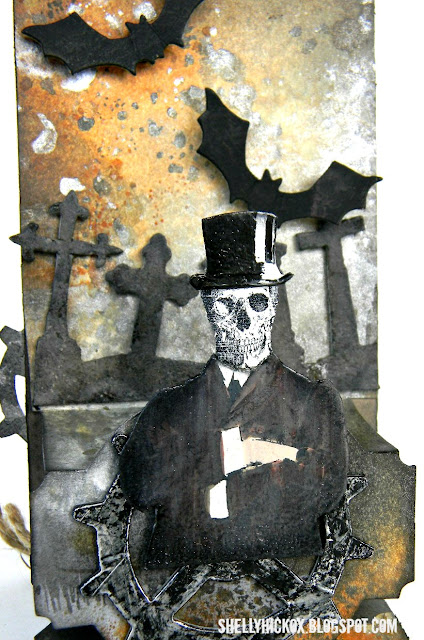 Here's a closeup of my guy. He was stamped on white chipboard and colored with Distress Markers. The pop-up background was created using the wrinkle free distress technique with the addition of the new Brushed Pewter Distress Stain. I hope you can see what a cool effect this makes! It just glows and changes depending on how it catches the light. The little tombstones behind him were cut from Grungeboard using the new Sizzix On the Edge Graveyard die and painted with a Pebble Dabber and inked with Distress. The bats were cut from chipboard and painted with a black Dabber. 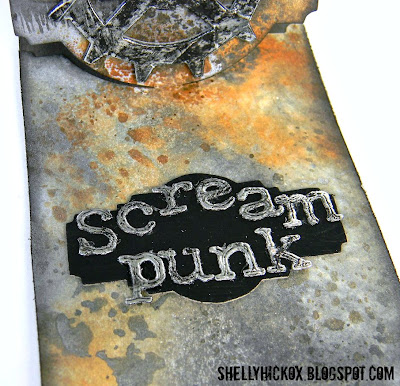 When I was imagining what this would look like, I hit upon the idea of calling it Screampunk. Of course, a quick Google search showed that I was definitely not the first one to come up with that term. Dang! I still like it, though. To spell it out, I covered cardstock with foil tape and cut it using the Sizzix Typeset die. After antiquing the letters with paint, I glued them onto a black chipboard panel that was cut using the Mini Label set. Love the texture on those letters!

Most of the supplies I used can be found at Inspiration Emporium via the links below. Be sure and use my coupon code - stamptramp - to save 10% off your order. I also wanted to mention that Artistic Outpost has all of their Halloween stamp sets on sale for 20% off this week! You can read all about it here.

Thanks so much for stopping by. Have a great weekend!

Posted by Shelly Hickox at 7:38 PM