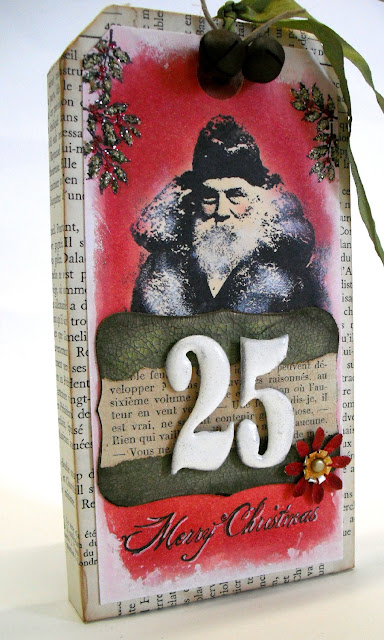 Today's tag from Tim is absolutely my most favorite - ever! The faux enameled numbers are worth the price of admission alone. Did I have any of the stuff he used? Almost nothing. Did I let that stop me? Hellz to the no! 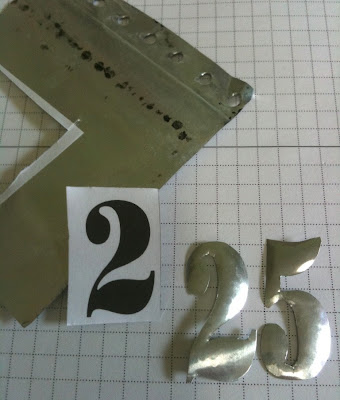 The biggest challenge was the metal numbers he used - they are totally the star of this tag and I really wanted this look, but didn't have any. Thankfully, I have great friends who share their stuff! My friend, Ronnie, brought a bunch of metal sheets to stamp club a few months ago. They'd been used in printing presses (?) or something like that. Anyway, I have a bunch and figured I could use them to make my own numbers. I found a similar font, printed it out, and adhered it to the metal. Using sharp scissors, I cut out the numbers, trying hard to keep a nice edge. A little burnishing on the back side and I had something that looked pretty darn close to the original, for free! Thanks, Ronnie - you rock! 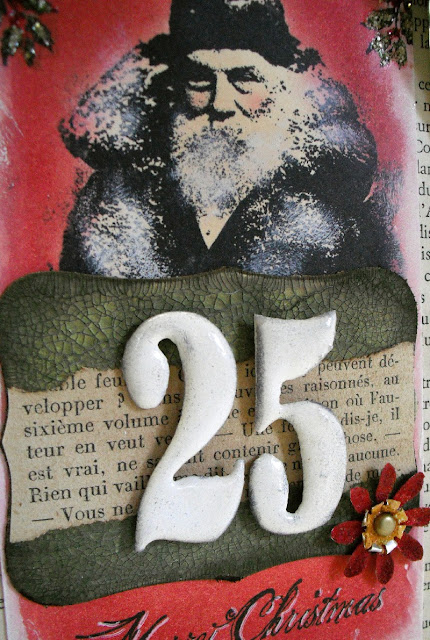 I didn't have white UTEE, but I had clear and regular white ep, so I combined them and embossed. I had to add quite a few layers of white to get the final look, but I am totally thrilled with how it came out. My flower was made with the same metal as the numbers. I had to stomp on the punch a little, but it worked!

The other thing I didn't have was green Distress Stickles. I ended up doing a multi-step method to get the final look. First, I tried using some of Martha's glitter, tinting it with Distress ink after it was dry. It was ok, but not really green enough. Next, I added some Adirondack green ep. Definitely made it a bit greener, but it still didn't pop. Finally, I added some Linen Distress Stickles. Perfect!

Oh, one more tip. I'm not sure if this was a tip from Tim or where I heard it, but, if you have the Picket Fence crackle paint, you can ink it with any color. So, if you don't have green crackle paint, don't despair! I painted my Grungeboard with white and, when it was dry, inked the heck out of it with various green distress inks.

Finally, I have to mention the awesome stamps I used. Is that not the BEST Santa stamp ever??? It's from Artistic Outpost's Snowy Woods collection. The holly and sentiment are both from AO's Sleigh Ride collection. Go buy them!

We're almost halfway through the 12 Tags of Christmas....my house is a mess, my studio looks like a bomb went off, and I'm not sure if I've changed my clothes or showered lately. But, I'm having SO MUCH FUN!! :-)
Posted by Shelly Hickox at 4:02 PM