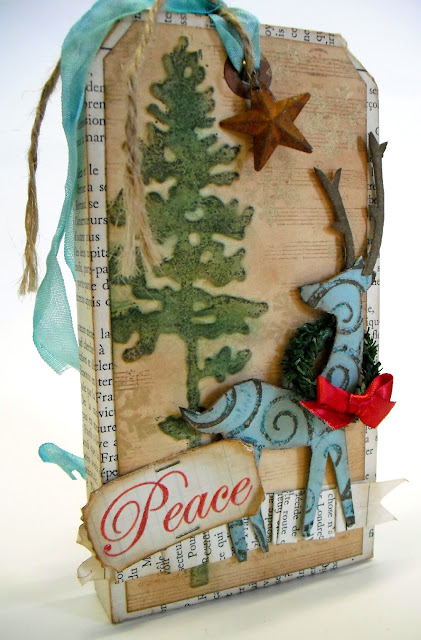 Yesterday, I spent the day down near Tupelo getting firewood w/my man, so I couldn't work on my tag - ack! I did get to go to Hobby Lobby though, where I was pretty excited to find the mini garland that Tim used on this tag. I also found some very cute holly garland as well. Even better, everything was 50% off, so I got a lifetime supply for a buck!

I had just a few deviations from Tim's tag today - the biggest was my tree and I was so thrilled to see that it worked! I did a variation of the Faux Embossing Folders technique from the latest issue of the Technique Junkie newsletter. Instead of using a punched shape, I used one of the masks from Tattered Angels - you know, the ones we all bought and then never used. ;-) After I'd embossed it, I inked up the mask and then used it like a stamp to color the tree. It ended up giving it a speckled look, which I think looks so cool! 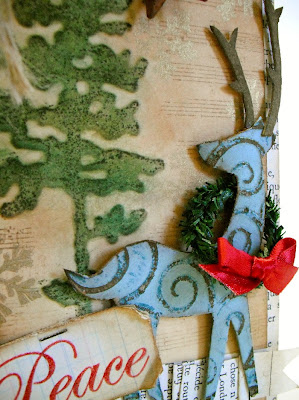 I couldn't get the right shade of blue for my background, plus, I'd really fallen in love with the way Stephen did his Day 4 tag. So, I decided to keep mine a nice, neutral brown shade. I think it really makes my reindeer stand out. For my reindeer, I used a clip art image that I Googled. I first painted him w/a dabber that I thought was the same one Tim used, but ended up being way darker, so I added a lighter blue over the top. When I sanded it, the original blue kind of peeked through. I liked that look so I left it that way. BTW, an emery board works great to sand those hard to reach spots!

Now, I'm off to see if I can get caught up and finish today's tag!
Posted by Shelly Hickox at 1:33 PM